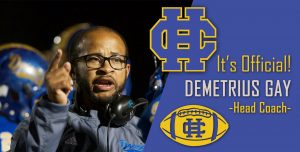 Henry Clay High School would like to announce that Demetrius Gay is the new Head Football Coach.  Coach Gay graduated from Henry Clay in 1996 after spending 3 years competing in both varsity football and track for the Blue Devils.  He played defensive back and running back on the football team and was a sprinter and jumper on the track team.  He went on to play college football and run track at Kentucky State University from 1996-2001 while he earned his teaching degree.  In the fall of 2001, he returned to Henry Clay and began his teaching career in the PE department and joining the football coaching staff as a defensive backs coach moving on to hold the position of Varsity Defensive Coordinator and Head JV Coach in later seasons.  He took the Head Track Coach position that year and still holds that position today.  Coach Gay has led our boys track team to 2 State Team Championships (2015 & 2016) and was named the State Boys Track Coach of the Year for Kentucky in 2015.  In his 18 year coaching career, Henry Clay has produced more than 30 Track State Individual and Relay Champions.  Coach Gay will be the 7th Head Football Coach at Henry Clay since 1923 as he takes over for his former coach and mentor, Sam Simpson.  Coach Gay moved out of the classroom several years ago and plays an invaluable role on our school staff as our Behavior Coach.